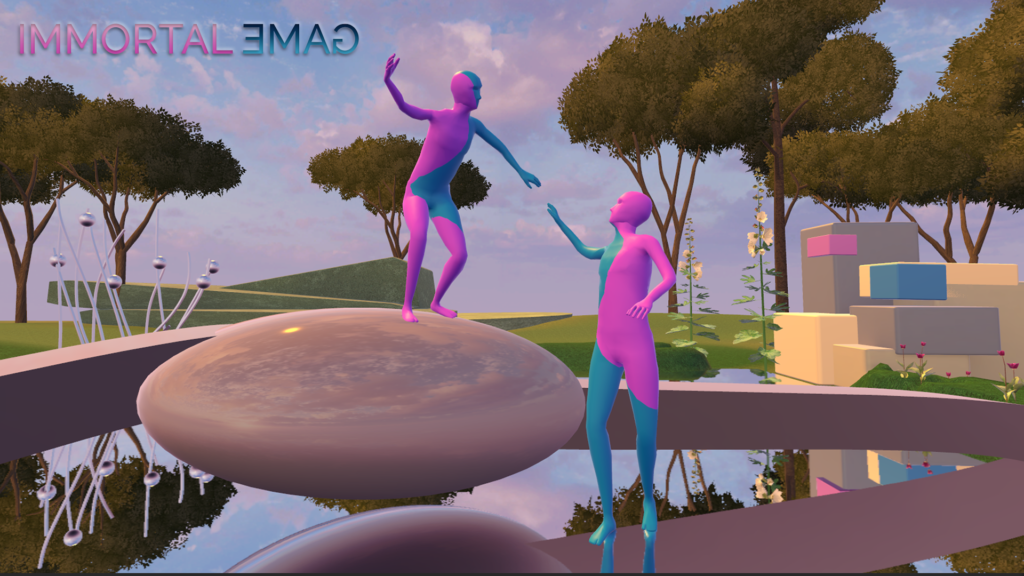 ‘What can be the nature of physical relationship when in distance?’ Together with performer Yiannis Logothetis and Virtual Reality (VR) company ImproVive, Evangelos Biskas is searching for alternative ways to develop a performance that challenges the limits of space and time. In Immortal Game VR, ImproVive creates a digital playground in VR where Yiannis joins from New York and Evangelos from Tilburg. The performers meet and interact with each other as avatars, and explore a new realm of physical possibilities that broadens their perception of movement. The audience can join the performance from anywhere in the world; they can experience it inside the Virtual Reality using their own headset at home, or they can view an online video stream providing both a real-world view of the dancers as well as a 2D view of the performance in the virtual world.

The live online performance was on 5 October 2021 at 20:00. Multiple audience members joined in VR and others who watched the 2D captured stream. You can look back at the stream here.

Read more here about the residency on the Nederlands DansDagen website.

On 29 April a new combined performance Immortal Game Live will premiere at theatre the Nieuwe Vorst in Tilburg. Here VR is combined with a theatre performance.

“Roger and Nikita showed me that turning imagination into reality is very much possible. I was impressed to see how quickly they managed to design a virtual park that was even better than what I had imagined for the project ‘Immortal Game’, and how flexible and sensitive they have been in responding to the needs of the creative process.

Always available, with a lot of care to bring the world of Virtual Reality further into new territories. Super attentive to giving the space for the artistic side to grow, yet cultivating a strong feeling of team effort.

Two human beings who, very generously and out of love, initiate inspiring and stimulating projects that bring people together and transcend the function of technology in our society.”